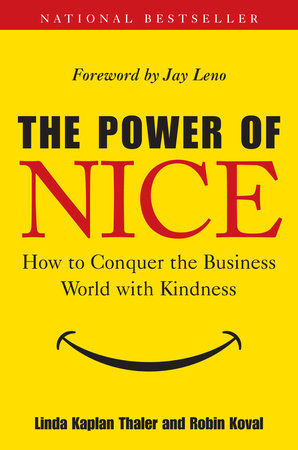 Linda Kaplan-Thaler and Robin Kaval run one of America’s most successful advertising agencies and, if they had their way, the corporate world would be a place where respect prevails and people aren’t vying for recognition and approval. They bucked the dominant market philosophies when they started their own agency with their ethos ‘never hire anyone who couldn’t be nice’. We have an absolute bottom line that you are not rude to co-workers. It is not acceptable. She says, that ethos has made the office a more peaceful and productive place, where her staff feel safe and look forward to being in.

“I know my staff like working here because we have an incredibly high staff retention rate, which is good for us financially. People can only get so far with bad behaviour ad then it doesn’t work any more. The most successful companies in the world are almost always headed by people who understand the value of nice. One payoff is that their employees would do anything for them. They are truly loyal because they feel valuable. Look at the Richard Bransons of the world. Their staff love them and would walk over broken glass to do their jobs well.”

Kaplan-Thaler and Kaval insist that in their world nice doesn’t mean pushover and does mean getting what you want. Kaval says she and Kaplan- Thaler have frequently been told that the reason they win pitches over the opposition is that they get their message across nicely, and are nicer than the competition.

Kaval strongly believes that change can be effected in workplaces so that the boss who is kind at home can also be kinder at work. “You can train people to be nice at work. Nice is like a muscle. The more you practice the stronger it gets. Just build on your nice repertoire: smile more, gossip less and spend an entire day where you only tell the truth. In the end we’re like apes and we mimic each other. Chances are if you start being nice to the executives they’ll be nice. It starts a cycle.”

Kaval says though changing habits may be difficult, being nice creates its own incentives. “It always reaps rewards.”